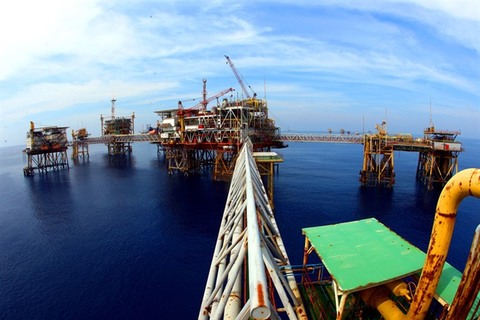 Crude oil output reached 7.1 million tonnes in the first six months of this year and in doing so hit 54.3 per cent of the annual target.

According to the Ministry of Industry and Trade (MoIT), prices and consumption of crude oil and some minerals had increased over the same period last year.

Most units in the industry had met their targets in the first half of this year, creating momentum for the rest of 2018.

Specifically, natural gas exploitation was estimated at 5.3 billion cubic metres, up 1 per cent; and liquefied gas reached 437.600 tonnes, up 18.5 per cent on-year.

The average price of crude oil in the first six months increased by 36 per cent over the same period last year to US$73 per barrel.

The hike helped the Viet Nam Oil and Gas Group (PVN) exceed its target, which was higher than last year.

The MoIT said that clean coal production was estimated at 22.42 million tonnes in the first six months, up 11.1 per cent on-year.

Due to favourable weather for the coal mining industry, the ministry said that the production index of the industry had increased. Consumption had also increased while the inventory had decreased compared to the beginning of the year.

"However, the second half of the year is the rainy season, so mining will be more difficult. Taxes and fees related to coal production have continued to increase in recent years, leading to rising production costs and lower competitiveness," said the ministry.

For other minerals, apatite ore mining reached about 1.45 million tonnes in the first six months, down by 6.3 per cent over the same period, while aluminum production was at 578,900 tonnes, up 95.6 per cent. — VNS