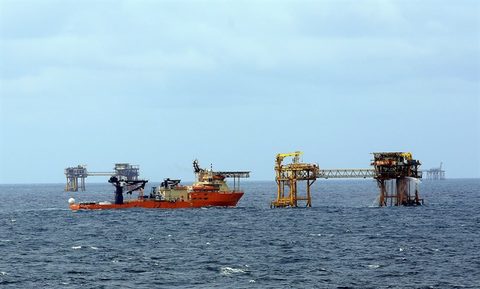 The Communist Review, a magazine of the Communist Party of Viet Nam, and the Viet Nam Union of Science and Technology Associations held the seminar to discuss the achievements, opportunities and challenges facing the oil and gas industry and to propose solutions to maintain its dominance in the process of international integration.

While state-owned enterprises (excluding the oil and gas industry) contributed about 42 per cent of GDP, PVN separately accounted for 16–18 per cent of GDP, the highest level of one company in the 2008-2015 period, Ha said.

In addition, the development of the oil and gas industry contributed to national energy security, playing an important role in Viet Nam’s sea strategy and contributing to the protection of national sovereignty, he added.

Overall, the industry helped enhance the value of oil and gas resources, promoting national industrialisation and modernisation and improving the competitive position of Viet Nam’s oil and gas industry in the world, Ha said.

However, he added, the national oil and gas industry was facing tough goals.

Under the development strategy of the oil and gas industry towards 2025, the industry aims to annually increase oil and gas reserves to 35-40 million tonnes of oil equivalent, oil and gas exploitation will increase by 10-36 per cent for each five-year period, of which the exploitation from overseas oil field must be 3 to 5 times higher than the current levels, the sector’s annual revenue is expected to grow by 10 to 15 per cent.

“The future for the country’s oil and gas industry will be tougher as the major oil fields near the shores are close to exhausting production. The calling for foreign investment in oil and gas exploration will also be more difficult,” Ha said.

Many large PVN projects lacked capital and access to credit while borrowing from international organisations is getting increasingly harder, Ha said. In addition, the company’s skilled human resources supply was becoming limited. Implementation of key projects abroad also faced obstacles, greatly affecting the the achievement of short-term and long-term goals of the whole sector, Ha added.

Truong Dinh Tuyen, former minister of trade, said that under the free trade agreements and commitments that Viet Nam had signed, import taxes on diesel and mazut would be zeroed out, also affecting the domestic oil and gas industry.

Thus, local suppliers would face stiff competition from not only foreign investors but also domestic importers due to the tariff elimination, Tuyen said.

With the establishment of the ASEAN Economic Community (AEC), in addition to the tariff reduction issue, there would be a shift in the labour force within the industry, leading to “brain drain” for the sector, Tuyen forecast. For example, some of PVN’s highly-skilled workers might move to other oil and gas groups from ASEAN countries if offered better working conditions.

At the seminar, participants agreed that the oil and gas industry should urgently build a human resource management system in accordance with international standards.

The whole industry would need to adjust its production and business strategy so that it could compete with foreign rivals locally and internationally. It would also need to put emphasis on the gas industry and consider it the driving force for the development of the whole industry.

At the same time, PVN research units should focus on research and application of technology to reduce the cost of exploration, exploitation and to diversify processed oil products.